An Introduction to
Feminine Mysticism

"There is a longing in every woman to discover oneself as a Goddess. To feel the strength and
power of femininity and understand, what kind of power and strength her femininity  gives her." 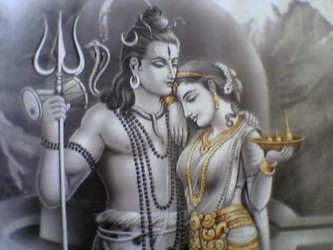 Lord Shiva to his wife, Parvati.
Ancient India’s tantra was a matriarchal cult given by Lord Shiva to his wife, Parvati. This secret teaching was handed down generation upon generation. For centuries it remained primarily in the hands of women. In ancient Egypt as well women were the first ones to hold the great knowledge. They were the priestesses before pharaohs existed and priestly orders came to power. In fact, all that the priests knew was learned from these ancient women, these mothers of human society. For the most part, the spiritual teachings for women have been lost to the general understanding of people.

However, these teachings are coming to light once again. As this occurs there will be a shift and the divine mother will come forward on this earth. She will gain power and status once again. Throughout human society this quiet revolution will occur and a new age built on love will come into being. The re-emergence of feminine mysticism is the key to this transformation. It is a most important topic, feminine mysticism. Much attention needs to be given to this topic in all strata of society. That it will re-emerge is certain. This knowledge will emerge in due time but as yet the time for the full impact of the teachings has not come. You must be patient. It will be soon enough. I will give some at this juncture but the main body of teachings cannot be given for a little while. Some others will give similar teachings. When the time comes, the knowledge will emerge in several forms.

Women are soon to gain in status and power; their plight will improve. There are forces beyond the ordinary at work in this respect. Oppression, violence, and inferior status will fall away. Even though the real change will be quietly done, effort will have to be made to educate women, to draw them to spiritual practice, to give them shelter from immoral men, to denounce violence against women, and to gain political and economic influence.
Women in Working Life and the World

The values of women, the needs of women, must be incorporated into the society, because it is when this comes forward that balance will be restored in the human society. When this happens, there will be a great change."

Women do not have the same position as men, though much progress has been made in the society to bring women to a stage where they have equal rights, equal pay, equal independence but still it is not achieved. Though it may seem that women have a great deal of freedom and independence, the overall condition of women in the world of today is not as it should be. Still the bird flies with only one wing as the other is hampered and not fully functional.

Equality requires that those women who are the most liberated from bondages come forth in the world in all spheres of life and make themselves known, make their values known, influence the society. It is changing quickly but it must change more quickly for it is bringing up the feminine qualities and characteristics that will save the human society from annihilation.

From this feminine quality and characteristic rising to the forefront the human society will grow and thrive in the future. Without this development the human society will move to destructive actions. Those possessive and territorial qualities and characteristics that are normally associated with masculine vibration are much less with the balancing of the feminine, with her influence and leadership.

Of course there are many variations among men and women so that a generalization will not apply to all. But it is true that, in the main, the masculine has certain qualities that are stronger than those of feminine nature. Those of feminine nature have certain qualities that are stronger in the main will be stronger. It can be said that those in female form have more capacity for emotional bonding and attachment. This is the result of the nurturing role of women with children. It is a biological factor.

What mother wants a war? What mother with sons wants a war? The mother’s desire is always that her children be safe and have the best life possible. So a woman is bound to bring peace to the world. As those of feminine quality become more influential in human society, they bring care for the aged, care for the ill, care for the young and strong desire not to allow harm to their sons and daughters.

So the women’s liberation movement sought to give equal employment to women. But then the women had to be like men, to forsake their time with their children, forsake their strong desire to be with the family and children in order to achieve financial success and status. Then, when their menses comes, they must pretend they have no pain and no need. When they go into menopause, they are not to show signs or symptoms. This is seen as a weakness, both to have pain with the period and to have signs and symptoms of menopause.

You see women leaving the captivity at home where they are dependent upon the working men for bread and butter. They leave to earn their own living in the male-dominated work force where they are expected to be like men. Then what happens to the children? What are those children with their mothers gone? What happens when the mothers have a hard-hearted boss who thinks it is a weakness if the mother must take time to be with her child?

This is not liberation. The women in this society are not as liberated as you may think. The true liberation of women requires the values and standards of women, the sweetness, the softness, the association of care and nurturance. Why is it a crime to need a day, a week, and a month off the work? Perhaps it should be the standard. The values of women and the needs of women must be incorporated into the society, the sooner the better and the more the better because it is when this comes forward that balance will occur in the human society. It is not for women to become men ignoring all of their own needs, trying to suppress them so that they don’t show any weakness. It is for women to come forward and all these things that are natural to stop being defined as weaknesses. These are natural to the feminine body and to the feminine mind. They are to be seen as a natural flow, respected as such, and given due time and accordance.

When this occurs, change in human society will occur of a great magnitude. War will become a black mark in human history. Human services and the care for living beings will become more prominent as women come to the front. There are women who are charging ahead of the crowd to take a post that requires them to adopt the standards, methods and values of men but this has a great cost to themselves. It is not inherent to their nature. It is not natural or happy. It is true as I have said that this may vary from individual to individual. But you will find when you analyse many women who have gone far in their carriers or in their political position having to adopt many masculine traits and practices, that they are feeling some pain, longing for something, missing or fearing they missed. This is because they have been oppressed even though they may be very successful, they have been oppressed as women and they have not been taught to value their sweet and softer side. They have been taught to suppress their feminine cyclical nature, their emotional variations to be successful in the world of man. Perhaps they have had to sacrifice having children or nurturing and knowing their children. Perhaps they have had no time for them and they feel a great loss.

These are hardships of women in society today where the women appear to make a better stand for themselves in the working world. But to truly make a better stand, it is not only to be in the working world, but to be proudly a woman, carrying forward the values and standards with pride, respecting the cycles of a woman’s life, of your life, your changes, the ups and downs, ebbs and flows, days when you must rest, days when you should go out into the world, days when you feel slightly irritable. The cycles of menopause, the cycles of a woman’s life are like the rhythms of nature. They are a part of the rhythm of the earth and the moon. They are great. They are not weaknesses. They are the tides of nature.

Be women in the working force, in the world! There must be made a place for women so that success in the world will be on your terms in the tides and rhythms of your body, your mind, your feelings, and your relationships. None of this should be forsaken, sacrificed. No, it is time for this to end because the greatness that women have to offer is not to be another man in the man’s workforce but to bring the feminine heart to change that masculine force, to soften it, modify it, dance with it in a rhythm that will soothe it and shape it and put an end to the strains that now rest upon the world.